Currently in the Greater Montreal area

ProAssistance services will soon be available to respond to your requests or needs, anywhere in Quebec.

Would you like to make a service call outside the Greater Montreal area? 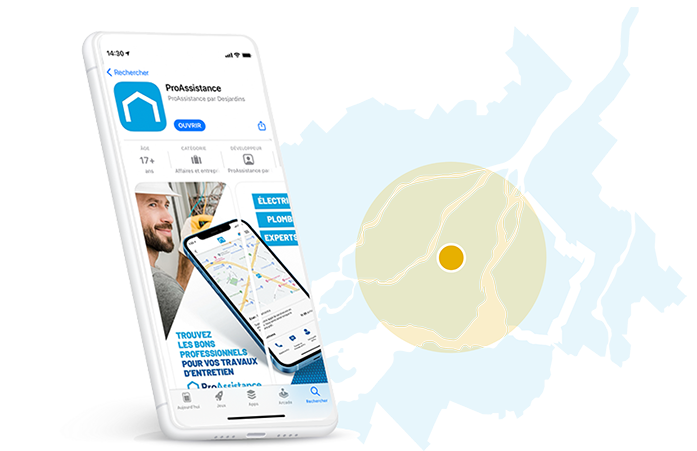 The Contest is organized by the Sponsor, together with its affiliates, including without limitation its parent, sister and subsidiary companies, retailers, franchisees, advertising and promotion agencies, suppliers of material and services related to the present Contest, and any other corporation, partnership, sole proprietorship or other legal entity directly involved in the Contest and their respective employees, agents, and other representatives (the “Contest Group Members”).

The Contest is open to all individuals who:

(i) Reside in Quebec; and

(ii) Have reached the age of eighteen (18) years as of the date of entering the Contest.

Employees of the Contest Group Members, as well as employees of any corporation, organization or company involved in the Contest, representatives or agents, advertising or promotion agencies as well as any persons with whom such employees reside are not eligible to enter the Contest.

4.1 Entry. To enter the contest correctly, fill out the registration form available online by following this link https://share.hsforms.com/16v8VGDIITBepOnSoVqxmqw5h3i8.This page will be accessible during the Contest Period.

4.3 Entry restrictions. There is a limit of one (1) entry per entrant during the Contest Period.

The odds that the registration of an entrant be selected depend on the number of eligible entries recorded and received during the Contest Period.

There will be one (1) random draw from all eligible entries received to award the prize aforementioned. The first entry randomly drawn shall be declared winner of the prize, subject to fulfilling all the conditions of the present rules and regulations. The draw will be held on:

The aforementioned random draw will be held in the offices of the Sponsor at the following address: 4293 Laurentian Autoroute, Laval, Quebec, H7L 5W5.

8. AWARDING OF THE PRIZES

8.1 To be declared the winner, the selected entrant must, in addition to meeting the Contest eligibility criteria and otherwise complying with the official Contest rules (the “Winner”):

a) Answer the message sent by email or left over the phone by the Sponsor or one of its representatives within ten (10) days following receipt by the selected entrant of the Sponsor’s message;

b) Correctly answer a mathematical skill-testing question, without receiving help and within a limited amount of time; and

c) Sign and return to the Sponsor, within ten (5) five days following its delivery, a standard form of declaration and release of liability releasing the Contest Group Members and Sponsor from any damage which may be incurred in connection with the use of the prize.

8.2 Disqualification. If any one of the conditions mentioned in above paragraph 8.1 is not met, the selected entrant will be disqualified and shall not be entitled to receive any prize. In this case, the Sponsor reserves the right, in its sole and entire discretion, to select at random another entrant as a potential prize winner.

8.3 Delivery of prize. Following receipt of the selected entrant’s signed declaration and release form, the Sponsor or its representatives will contact the Winner to inform him or her of the method by which he or she may take possession of the prize.

8.4 Use of prize delay. There is no delay for the use of the prize. The terms and conditions of the BMR gift cards are available online at: HTTPS://WWW.BMR.CA/EN/BMR-GIFT-CARD. The gift cards can be used at any BMR merchant and have no expiration date. The Winner who fails to do so will be deemed to have forfeited his or her prize, releasing the Sponsor from all obligation of any kind towards the Winner.

9.1 Verification of entries. The validity of any Contest entry is subject to verification by the Sponsor. Any entry that is illegible, incomplete, fraudulent or contrary to these official Contest rules will be disqualified.

9.2 Disqualification. Any entrant or other individual who enters or attempts to enter the Contest in a manner which is contrary to these official Contest rules or which is otherwise disruptive to the proper operation of the Contest or by its nature is unjust to other entrants or potential entrants will be disqualified. All decisions made by the Sponsor or persons or entity designated by the Sponsor as contest officials, including without limitation those concerning the eligibility or disqualification of entrants, are final without right of appeal. All entries become the property of the Sponsor and none will be returned.

9.4 Acceptance of Prize. Except as set out in paragraph 9.6 below, all prizes must be accepted as described in these Contest rules and cannot be returned, substituted for another prize or exchanged in whole or in part for money.

9.5 Substitution of Prize. The Sponsor reserves the right, in its sole and absolute discretion, and for any reason whatsoever, to substitute for the prize, or part thereof, another prize of equivalent or greater value, including without limitation a cash award equivalent to the total value provided in these Contest rules.

9.7 Prize/Winners. By entering the Contest, each entrant acknowledges that the Contest Group Members shall not be required under any circumstances to award more prizes than the number of available prizes, as set out in the official Contest rules. In the event that, for any reason whatsoever (including without limitation, as a result of an error, malfunction or defect in the design, advertising, management, implementation or administration of the Contest, whether mechanical, electronic, human or otherwise) the number of declared Winners or the number of prizes claimed by entrants is greater than the number of prizes available, the Sponsor reserves the right, in its sole and absolute discretion, to end the Contest in whole or in part, without notice, subject only to the prior approval of the Régie des alcools, des courses et des jeux, if required, in respect of the Province of Quebec, and to award the correct number of prizes among the correct number of Winners, selected in accordance with these Contest rules from among those eligible entries validly submitted prior to the termination of the Contest.

9.8 Suspension/Termination of Contest. The Contest Group Members will accept no liability of any kind in all cases where their inability to act is the result of a fact or situation out of their control, of a strike, lock out or any other labor dispute in their establishment or in the establishments of companies or organizations whose services are used for the purposes of this Contest. It reserves the right, at its entire and sole discretion, to amend, cancel, terminate or suspend the contest, partially or entirely, due to any cause or circumstance, including, but not limited to, if an event out of its control will or would corrupt or affect the management, security, impartiality or normal contest flow e.g. virus, computer bug or unauthorized human intervention, subject to approval by the Régie des alcools, des courses et des jeux du Québec in the province of Québec.

9.1 1 Non-liability. By entering or attempting to enter the Contest, each entrant and/or purported entrant agrees to release, discharge, and forever hold harmless the Contest Group Members and their officers, managers, employees, shareholders, agents and other representatives (collectively the “Indemnified party”) from any and all claims, actions, damages, demands, manner of actions, causes of action, suits, debts, duties, accounts, bonds, covenants, warranties, indemnities, claims over, contracts and liabilities of whatever nature or kind arising out of, or in connection with the entrant’s participation or attempted participation in the Contest, compliance or non-compliance with these Contest rules and acceptance and use of the prize. The Indemnified party will not be responsible for lost, incomplete, late or misdirected entries or for any failure of the Contest website during the Contest Period, or for any technical malfunction or other problems with, any telephone network or lines, computer on-line systems, servers, access providers, computer equipment or software or for any technical problems or traffic congestion on the Internet or at any website, or any combination of the foregoing, and will not be liable for any resulting death, injury or damage to any person or property arising from, or relating to, that person’s or any other person’s participation or attempted participation in the Contest. Any attempt to deliberately damage any website or to undermine the legitimate operation of this Contest is a violation of criminal and civil laws and, should such an attempt be made, the Sponsor reserves the right to seek remedies and damages to the fullest extent permitted by law, including civil and (or) criminal prosecution.

This Contest is not sponsored, approved, or administrated by Facebook. The entrant understands that his or her information is given to the Sponsor and not to Facebook.

9.12 Communication. The Sponsor will not communicate or correspond with the Contest entrants regarding the Contest, except with the entrants randomly selected as potential prize winners.

Note: The use of the masculine form has been chosen in order to lighten the text.